Since April 20 to August 2019 Child Well-being Fund Ukraine conducted an informational campaign “Careful Parents” which focused on the key role of parents in protection of children from threats online.

Children are much less affected by manipulation, including online when their parents find the time to talk with their children, who are attentive to the child's behavior, are able to notice their needs. This is why the slogan of the campaign is: “Parenthood is a challenge. Be careful not to miss something” and the accompanying materials will guide you how to monitor a child's safety online.

The campaign “Careful Parents’ was conducted by the Empowering Children Foundation in Poland in 2017 in the within activities of the Polish Center of Safe Internet. The right to coordinate and use the materials of the campaign was provided to the Child Well-being Fund Ukraine on a free basis. 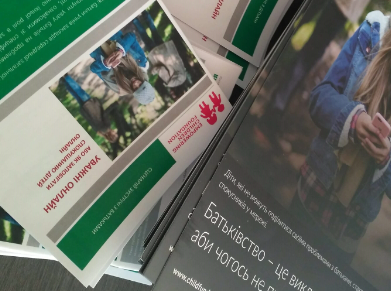 To conduct the informational social campaign “Careful Parents” the following materials were prepared:

The official launch of the campaign was organized during the All-Ukrainian Conference "Unnoticed Teens", organized by Child Well-Being Fund Ukraine in Kyiv on April 19-20, 2019, in partnership with Borys Hrinchenko Kyiv University and NGO "Sunshine Children’s Center". 142 experts were attended the conference.

Campaign posters were distributed in public places of towns and villages in Vinnytsia, Volyn, Dnipropetrovsk, Donetsk, Zgytomyr, Kirovohrad, Kyiv, Odesa, Rivne, Kharkiv, Kherson, Cherkasy, Chernivtsi and Chernihiv regions. The number of QR-code scans from the posters is still increasing and for today it is 180.

The campaign video “Careful Parents” on the Fund’s YouTube channel gathered 2 567 views. 4100 visitors were addressed to the page with campaign materials on the web-site of Child Well-Being Fund Ukraine.

More than 100 electronic media (official pages of local administrations, educational institutions, local media etc.) published the press release of the campaign with links to its materials. The information about the campaign was mentioned in the article «Seduction online: what threats are waiting for children in the Internet and maniac’s “new” approaches in grooming» on 23.05.2019 on the multimedia platform NEWSONE and during broadcasting of the program dedicated to the problem of grooming for the rubric “Daily Topic” on the TV channel UA Donbas on August 2.

After the official close of the project Child Well-being Fund Ukraine continues operating of the campaign’s Facebook page. Such decision was connected with the result of the national survey when over that 80% of respondents consider this campaign as necessary for the Ukrainian society.

The campaign “Careful Parents” was organized by Child Well-being Fund Ukraine in the frame of the projects «Prevention of child sexual abuse and sexual exploitation in the countries of Central and Eastern Europe” with the support of the OAK Foundation and “Teaching children to be protected from sexual abuse” with the support of the Democracy Grants Program of the U.S. Embassy to Ukraine.