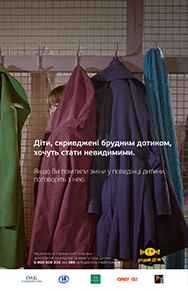 The «Bad Touch» campaign is directed to parents and specialists working with children and it was aimed at raising the general awareness about the issue of sexual abuse of children, discovery of abuse cases, their prevention and giving help to children which became victims of the abuse. Sexual abuse in family is the most concealed and latent form of violence. It is assumed that sexual abuse is experienced by 20-30% of girls and 10% of boys in the age up to 14, while only 25% of agressors are complete strangers to children. In 75% of cases the rapists are familiar to children to same extent: relative becomes an aggressor in 45% of instances , in 30% of cases it is a less familiar acquaintance - brother’s friend, mother’s lover. Th e most likely person to abuse a child in the family is father, father-in-law, caregiver.

Children can not counteract the violence on their own. We (adults) have to know how to act when there is a suspicion that a child is being sexually exploited.